At this year’s LogiMAT, consulting and software houses from the field of customs and foreign trade had two main topics at hand for the trade audience in Hall 5: Commodity Origin and Preference Calculation (WUP) on the one hand and export control on the other.

“Complicated proofs of preference? We WUPpen that!”

Under this title, Corinna Tamminga, Consultant for Customs & Foreign Trade at dbh Logistics IT AG (dbh), gave a lecture at the trade fair forum. The message that it is now possible for companies to carry out “a transparent and demonstrable preference calculation” through the use of software, which provides “complete proof of the origin of goods in the form of supplier declarations”, was well received by the audience. After all, this offers exporters considerable savings in customs duties.

dbh offers such software under the name Advantage Compliance Präferenzmanagement. By default, the product contains all agreed preferential rules between the European Union and third countries, as well as trade zones. Automatic update mechanisms ensure that the information is always up-to-date.

Export control – an issue that concerns everyone.

Compliance is not a new issue in the foreign trade, but the importance of legally compliant and secure action is growing more and more, especially at international level. While in recent years, particularly influenced by the events of 11 September, the focus has been on the control of individuals and organisations (keyword: anti-terrorist lists), the focus is now increasingly on country and goods audits.

This is hardly surprising, given the high number of existing total, partial or arms embargoes and a barely countable number of trade restrictions, of which companies exporting the “dual use regulation” in particular are causing headaches. This defines restrictions on goods which, in addition to the original purpose of use, can be used for “critical end-use”, i.e. military or terrorist purposes. As this is usually not seen in goods (e.g. machine and electronic components), exporters are exposed to a high risk of error.

The dbh Software Advantage Compliance, which has been on the market for several years as a solution for sanctioned seam testing, has now been extended by a suitable module. Export control can now also be carried out automatically by checking consignment lists in accordance with international export control rules.

A total of 29,500 visitors, an increase of 1.5 percent, were counted by the trade fair managers this year – a trend that makes exhibitors like dbh optimistic. “The interest of trade visitors in our portfolio has increased significantly this year,” says Marco Molitor, dbh member of the Board of Management. “This is reflected not only in the higher number of visitors, but also in the high quality and intensity of the conversations. We are looking forward to next year”.

For 2014, dbh has again planned its own booth at LogiMat. Interested visitors will also have the opportunity to have current and new solutions from the consulting and software house demonstrated at transport logistic, (4-7 June in Munich) in 2013.

There is still time until 31.12.2020 to conclude a free trade agreement between the EU and the UK (UK). Then the transition period for Brexitends. Boris Johnson continues to hold on to this date. It is not yet clear what will come next. Negotiations between the EU and... 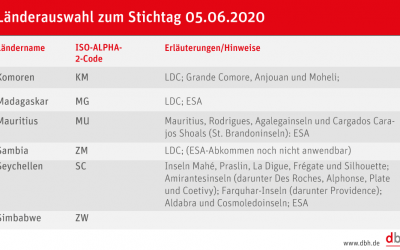