CARGO ONLINE Software GmbH, one of the leading manufacturers of forwarding software, moved into new offices at the Bremen headquarters of dbh Logistics IT AG (dbh) on 1.8.2013. The previous headquarters in Bremen-Vahr was dissolved, the telephone numbers and e-mail addresses of the employees remain unchanged. At the same time, the two previous managing directors, Ursula Brüdern and Peter Baumer, handed over the management of the company to Reimund Ott and Marco Molitor. Ott and Molitor have been on the CARGO ONLINE management board since July 2012 and at the same time form the Board of Management of dbh Logistics IT AG.

Bundled know-how under one roof

With the move to bremen city centre, the communication channels between the two companies and the individual departments are now shortened. Marco Molitor is good: “By merging the two companies spatially, we have created another important prerequisite for achieving the goals we have set together.” Molitor refers to the well-known freight forwarding software CARGO ONLINE, which was recently expanded by a mobile app for presentation at the airport. In addition to expanding the range of mobile solutions and further developing existing functions, two new modules are currently in the works. One module is designed to simplify the handling of land transports, while the other is designed to optimize the processes in the handling warehouse.

The merger of the two sites is preceded by the acquisition of CARGO ONLINE Software GmbH by dbh Logistics IT AG in 2012. One reason for this step was the securing of the company’s succession, which is now being taken into account. The managers have also fulfilled the promise to preserve all jobs by merging the sites.

Federal Government is funding the SrangierTerminal 4.0 project with EUR 2.35 million: On 27.05.2020 the application of the JadeWeserPort companies for funding of a research project to test the fully automatic shunting process in the exhibition group in the freight... 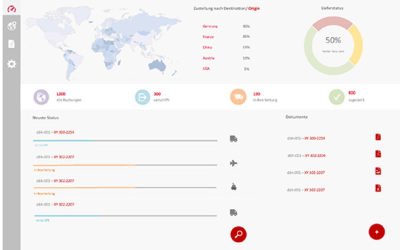 Freight forwarders can now present customers and their agents the status of their international shipments more up-to-date and clearer. With the new CargoTrace portal, dbh offers not only additional display options, but also the possibility to record forwarding orders...